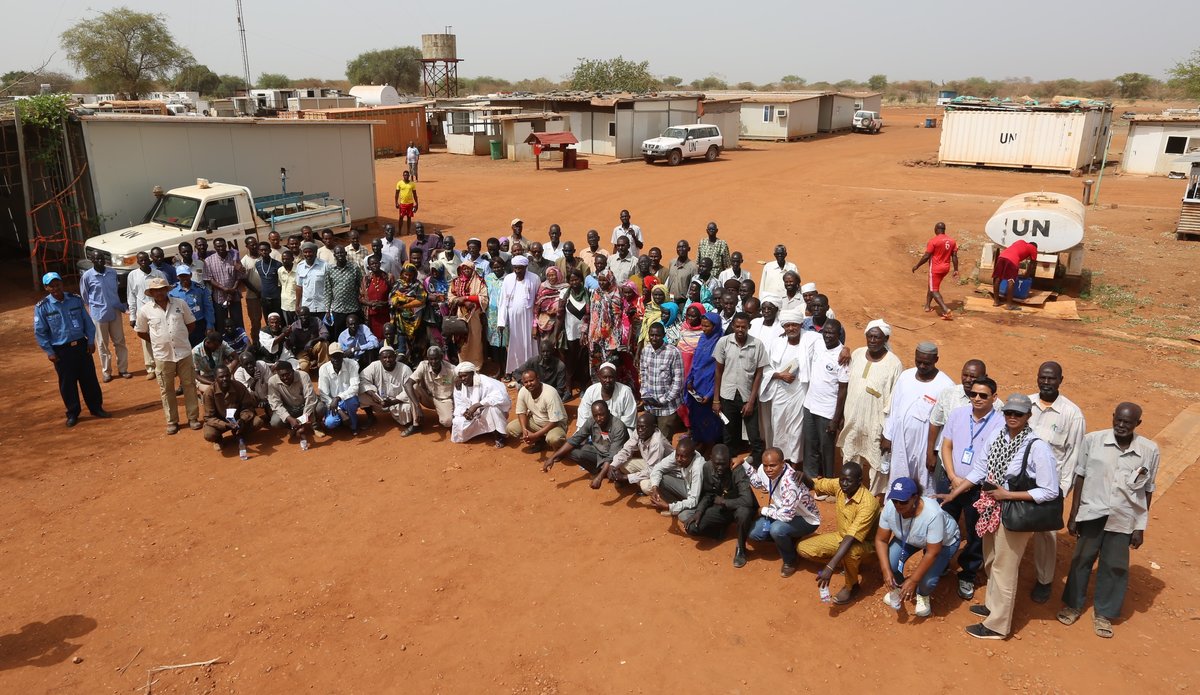 The Community Liaison Office (CLO) is the substantive component of UNISFA under the Office of the Principal Officer.

It was established to support community dialogue and efforts by the Misseriya and Ngok Dinka communities through the Joint Peace Committee (JPC) and other related community-based peace initiatives; to strengthen inter-communal relationships and facilitate stability and reconciliation in the Abyei Area; maintain stability, foster intercommunal reconciliation, and facilitate the return of displaced persons to their villages and facilitate the delivery of basic services; to strengthen the capacities of Community Protection Committees (CPCs) in order to assist with management of law and order processes, while ensuring the humane and dignified treatment of suspects and other detainees and support the Governments of Sudan and South Sudan to take steps to implement confidence-building measures, ensuring women are involved in all stages, including through reconciliation processes at the grass-roots level as well as through support for the ongoing efforts of non-governmental organizations i.e. the youth unions and associations engaging in peacebuilding.

However, none of these arrangements have been implemented and as a result, there is an absence of governance with the following consequences: The JPC is an informal local led peace mechanism made up of eminent elders of the Misseriya and Ngok Dinka communities. It is a local lead process created to serve as a mechanism for resolving community disputes and promoting inter-community harmony. It also acts as a bridge between the people, de-facto official on one hand and UNISFA on security matters, information sharing and coordinating community-related matters. UNISFA provides the administrative and logistics support for the JPC weekly Thursday meetings to discuss knotty issues likely to trigger conflict between communities and come up with a solution or common ground and arbitrate on contentious issues. They also come up with a formula on the management and sharing of scarce natural resources. They ensure perpetrators of inter-communal violence are brought to account through traditional justice mechanisms such as “the blood money” compensations and therefore dissipate anxieties and prevent violence. Through the meetings, UNISFA support the community-based peace committee process; engaging women and youth in order to empower their capacities to support intercommunal peace.

The JPC has an oversight arrangement over the Community Protection Communities (CPC), and the Joint Traditional Court in Amiet market. It, therefore, sets the rules and regulations for minimum standards good governance of Amiet common market, settles criminal matters such as theft of cattle, blood compensation for murders, cattle rustling, etc.

Main functions of the JPC with regards to the management of law and order include:

The forums target Leaders from three main migration corridors namely: Eastern, Northern and Central and provide a platform for parties to come up with ground rules which they commit to through a ‘Resolution’ on the use of scant natural resources such as water and pasture.

The aim is to provide an early warning system in order to prevent and deter potential conflict drivers during the dry migration season when nomads move southward to seek grazing land and water for their animals and during the reverse cycle.

Grassroots initiatives including youths, women and other civil society actors

CLO works in collaboration with the Office of the Principal Officer to mobilize women and grass root civil society actors in peacebuilding processes. We support the implementation of the Gender Peace and Security Programme and advocate for Women in accordance with UNISFA mandate.

To further promote an inclusive peace process, efforts to crowd-in grass root actors through their respective civil society institutions. On the side of the Ngok Dinka, discussions are taking place through the civil organization network, a coalition of associations and unions of the youth, women, chamber of commerce, livestock owners association, farmers, arts and artisans association, health professional association, human rights society, religious leaders, and others.

Avenues to engage with actors on the Misseriya side are also underway. The main aim is to advance civic participation and engagement in peacebuilding and therefore broaden the space for the civil society to play a meaningful role in the AAA peacebuilding and reconciliation processes.

The Amiet Joint Common Market is currently the only common place where the Misseriya and Ngok Dinka Communities co-exist within the Abyei box.  The initiative was born out of the 2016 Peace Agreement that was signed between the community leaders. A large population of Misseriya and Ngok Dinka traders gathers and ply the area as well as other community members from Sudan and South Sudan including foreign nationals from Ethiopia, Uganda, and Eritrea making the market the nerve center of Abyei box.

The biggest challenges are the lack of baseline data in addition to poor basic infrastructures and facilities; heightened security threats, weak rule of law mechanisms and institutional frameworks to curtail crime and violence.

The area is prone to inter-ethnic violence and with a growing youth bulge, it has a huge potential to generate new threats. The operation of the Joint market, on one hand, provides an opportunity for trade and free movement of persons within Abyei, but also can generate additional challenges if not well managed.

CLO continues to engage community leaders particularly the JPC through the establishment and management of community joint mechanisms such as the Joint court; Joint CPCs; detention facilities and other such mechanisms with the objective to reinforce peace and underpin reconciliation. The Traditional Justice system is a mechanism that regulates human conduct and promotes social order in communities, and it plays a key role to restore normalcy and order.  While the Ngok Dinka and Misseriya apply different justice systems (each embedded into their own respective national judicial system i.e. South Sudan and Sudan respectively), a de-facto joint traditional court based on customary practices of the Ngok Dinka and Misseriya was established to adjudicate disputes and settle commercial transaction disagreement in the Amiet area. The two laws are however based on ancient traditions and cultural practices.

UNISFA does not have a specific mandate to support the judicial systems operating in the Abyei Administrative Area. However, CLO engages the traditional chiefs to ensure civilians are protected through the traditional judicial process and the human rights of the citizenry are protected. UNISFA provide and support the traditional justice system through training, advocacy, mentoring and technical advice to enhance, shape and build their understanding on human rights, RoL, and justice issues as well as enhance capacities of traditional justice leaders to handle natural resource conflicts within communities and inter-communal customs.

Under Security Council Resolution 2416, par. 18 UNISFA in close coordination with the Misseriya and Ngok Dinka is called upon to strengthen the capacities of Community Protection Committees (CPCs) in order to assist with the management of law and order processes in Abyei, while ensuring the human and dignified treatment of suspects and other detainees.

The CPC is a de-facto policing body whose main role is to provide policing functioning: i.e. carry out the arrest, detention of suspected criminals and hold criminals in custody as well as carry out correctional duties and reform services of the detainees. One of the critical aspects of the CPC is that they are taken from among the community members and that they work on a ‘no-pay’ voluntary basis. The CPC is more predominant on the Southern side of the Box i.e. Ngok Dinka side but Joint operations take place in the Amiet area.

CLO engage CPCs, on diverse Rule of Law (RoL) issues relating to human rights, holding conditions and treatment of detainees (often subject to unsanitary detention centers) and on issues of prolonged detention and arbitrary arrest. We also support CPCs by providing capacity building and mentoring to CPCs Members on arrests, detention and proper arbitration of offenders.

UNISFA POC mandate, as highlighted in resolution 1990 (2011) tasks the mission to take the necessary actions to protect civilians under imminent threat of physical violence, including the use of force when required, in line with mission mandate, the United Nations Charter and other applicable international laws.

CLO supports the implementation of UNISFA’s mandate to protect the Abyei Area from unauthorized elements, as defined in the Agreement between the Government of Sudan and the Sudan People’s Liberation Movement (SPLM) on Temporary Arrangements for the Administration and Security of the Abyei Area of 20 June 2011 (the 20 June 2011 Agreement), and to ensure security in the Abyei Area.  UNISFA implements its POC mandate in accordance with the three tiers set forth in the DPKO/DFS Policy on the Protection of Civilians in United Nations Peacekeeping:

Given the unpredictable security situation in Abyei, and polarized rule of law mechanisms in the area, protection of civilians continues to be a concern particularly given the rule of law and governance vacuum of AAA.

CLO leads the implementation of Quick Impact Projects (QIPs) in line with the DPKO/DFS policy and guidelines to improve the environment for mandate implementation by generating support for the mission and to build confidence and trust between UNISFA and local communities.

UNISFA is not a humanitarian mission. However, UNISFA makes all efforts to meet at least some of the basic needs of the local population through the Quick Impact Projects (QIPs). These are small-scale, but vital projects for the communities, which are planned, executed and handed over in consultation with stakeholders, including the local community, NGOs and UN Agencies Funds and Programmes.

QIPs currently operate on a standing budget of 500,000 USD annually. QIPs have proved extremely useful and successful in the past three years with an implementation rate of 100%, albeit a few challenges including local ownership and sustainability. Usually, these projects cover the areas of livelihood, social gathering, rule of law, traditional justice and basic needs, especially water projects.

These projects are vital for peacebuilding, social interactions, the establishment of rule of law, enforcement of traditional justice and provision of forums for meetings of two communities to consolidate peace. Water handpumps and water yards, community halls and meeting halls, vegetable gardens, grinding mills and oil presses, utility items for the Community Protection Committees, health care centers, latrines, detention centers are a few examples of such projects. Partnership with Other UNISFA Components and Agencies, Funds and Programmes (AFPs)

CLO works in collaboration with UNPOL/Correction Services to support the activities of the CPC in areas of rule of law, upholding human rights standards and prevention of arbitrary arrest and prolonged detention including HRDDP.

In implementing UNISFA POC Strategy, partnerships within the Mission components and with relevant UN Agencies are built to unite resources and capacities to benefit the community.